Space Time BlockCoding(STBC) is a transmission method of radio networks, which uses the temporal, the spectral and also the spatial dimension of the transmission path.

In STBC coding, the data stream is coded into data blocks for transmission. Redundant copies of these are transmitted in a time-distributed manner via spatially distributed antennas. This multiple transmission is intended to compensate for impairments due to fading or thermal noise. However, the time-shifted STBC signals must be transmitted via multiple antennas or antenna arrays on the transmitter side; on the receiver side, one antenna can be used, but a receive-side antenna array helps to improve reception conditions. The STBC transmission method, in which multiple copies of the data are received, is also known as spatial diversity and is the multiple input multiple output( MIMO) strategy. 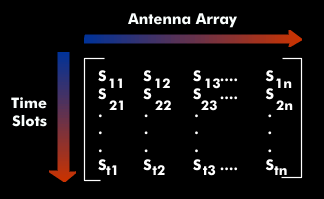 STBC coding is usually represented as a matrix. Each row represents a time slot and each column represents transmission from an antenna. In this notation, "S" represents the scattering parameter transmitted in time slot "y" from antenna "x".

In Space Time Block Coding (STBC), a distinction is made between orthogonal space time block codes (OSTBC) and non-orthogonal space time block codes (NOSTBC), which includes QSTBC (quasi-orthogonal). Orthogonal Space Time Block Code (OSTBC) has full diversity on the receiving side and low decoding complexity, resulting in a slightly lower data rate. OSTBC is used to achieve full data rate and diversity in multiple input multiple output (MIMO) with two antennas. If MIMO systems have more than two antennas, then the full data rate can only be achieved with QSTBC, but with limited diversity.

STBC coding is proposed by the Enhanced Wireless Consortium( EWC) for 802.11n, among others.